Today I'd like to welcome Angela Verdenius, an Aussie sci-fi/romance writer who has written a fantastic tale of vengence and love set in another galaxy.

Jennifer:  Hello! Thank you so much for visiting my blog with me today! It’s such a pleasure to chat with you. So tell me…

How did you dream up the dynamics of your characters? Did you study psychology, because they seemed very true to life, especially the two couples, Darvk and Tenia, and Maverk and Reya -

Angela: No, I never studied psychology! I have to admit that the characters just came to me and developed as I wrote, each one with their own temperament and ideas. They present me with very different and interesting characteristics!

Jennifer:  Is this book part of a series? If so, can you tell us about it?

Angela:Yes, this is the first book in the Heart’s Desire Soul Destroyed series. Each book is a stand-alone story that features side characters from another book as the main characters in their won story. The couples come from a wide range of backgrounds - bounty hunters, warriors, outlaws, soldiers, traders, prisoners, space pirates, witches, demons and others. Some of the stories are darker than others, some lighter, some sensual, it all depends on the storyline. I wanted to represent different stories with different situations. Though the series is now quite old, I am in the middle of revising/re-editing/rewriting it, bringing it up to date!

Jennifer: Can you give a fun or interesting fact about your book?

Angela:It was originally only going to be a stand alone story, but as I wrote it the other characters started to come forward and needed their stories told, so the one book turned into a series!

Jennifer:  What gave you the inspiration for your book?

Angela:I’d only read historical romance until I picked up warrior’s Woman by Johanna Lindsey, and my love for sci-fi romance was born.

Jennifer:  Do you plan all your characters out before you start a story or do they develop as you write?

Angela:Mostly they’re planned out, but different characteristics start to appear as the story develops.

Jennifer: What are your upcoming projects?

Angela: I’m currently writing a contemporary romance, then plan to start revising the 2nd book, which is Reya’s story.

Jennifer: That's good, because I loved Reya's character! Her banter with Maverk (or rather, his banter and her icy stare were a lot of fun to read about!) 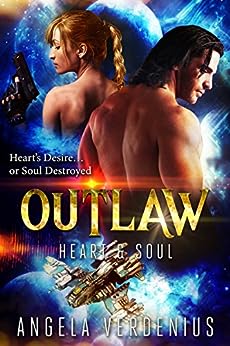 Murder, betrayal, danger and despair…
A time when outlaws are hunted and sold…
When legends are born amidst blood and lies…
When you may not like what you discover…

He’s never believed in keeping slaves, in buying and owning another person, but a soft-heart and an unexpected attraction has made Darvk, the Daamen captain of a trading crew, break his belief, and he’s now the new owner of a notorious outlaw.

She’s beautiful and feisty, she’s injured, and she has blood on her hands.
One of an outlawed race of warrior woman, this Reeka is intent on escape.
Escape for her could mean capture and death, and he can’t let that happen.

The legends are bloody.
The bounty hunters are on her trail.
But so is the Inka Empire.

Tenia’s hell-bent on finding her sister - both blood kin and warriors, but escaping the Daamen captain isn’t as easy as it looks.

He says he’ll help her.
She’s been betrayed before.
Can she trust him…and her heart?

From the Outlaw Sector to the Lawful Sector, nothing is as it seems, there are allies and enemies in a vast universe…and a secret that loops back to the very bloodline of the Reekas.

EXCERPT:
The hover tray halted, drawing her attention back to the present and the huge trading spaceship that stood alone in the docking bay. Wooden crates and heavy sacks were piled near the cargo opening, and a ramp was down. Traders, their heavy muscles bulging and cheerful voices laughing and cursing, busily loaded the crates and hover trays.
They were a tough looking crew in leather vests that hung open, and coarse material pants tucked into boots. A couple of the traders wore headbands to keep long, shaggy hair out of their faces, while others had their hair tied back at the napes. All of them had a small, silver hoop in their left earlobe. She counted quickly - twelve traders, including Darvk and Maverk.
“Hey, Darvk, what’ve you got there?”
“What the hell you been trading, Cap’n?” Another dropped the sack he was carrying onto the ramp. “That’s human cargo!”
Leaving their chores, the curious crew gathered in a wide arc around the cage, their gazes surprised as they stared at her.
“Bloody hell, ‘tis a wench!” one of them blurted out, sounding shocked.
So, this was to be her fate. Plaything to a crew - to be raped, used by them all, until they tired of her. Well, she wouldn’t go down without a fight. Once aboard the spaceship, she was lost. Escape was only possible while still on this planet.
The cage door opened and the hover tray operator looked warily at her narrowed eyes.
He drew back quickly. “You bought her, you get her out!”
~*~
A red-haired trader gaped. “You bought a slave?”
Darvk scowled. “Nay, I didn’t.”
“Well, in a sense he did, Red.” Maverk grinned. “Though to be fair, he did it because he felt sorry for the wench.”
The crew exchanged questioning looks.
Reaching into the cage, Darvk noted the warning glower in the lass’s eyes. “Give me a hand, Maverk.”
“You need assistance for one helpless lass?” Red was appalled.
“Helpless?” The operator guffawed while handing the golden death mask to Red. “Your captain bought himself an outlaw.”
“Outlaw?”
“None other than a Reeka warrior.”
A fair-haired trader gazed at the occupant of the cage. “I heard they were all dead.”
“Not this one,” Darvk answered from the cage where he and Maverk were leaning in, trying to grab the lass who strained back against the bars. “Damn it, wench!” he added in frustration. “Come here!”
The cage was too small for the outlaw to avoid his long arms, and she was dragged out. Not wanting to spook her, especially when she tried to jerk away, he steadied her with a hand under her elbow.
“Here.” The operator handed Darvk the keys. “Keep the chains, you’ll need them.”
After slamming the cage door shut, he jumped into the chair at the head of the hover tray and skimmed off down the road back towards the settlement.
“She’s a Reeka?” Aamun, the ship’s engineer, raised his eyebrows dubiously.
“Don’t be deceived by looks.” Maverk grinned.
As the outlaw looked around, Darvk realised he didn’t even know her name. Though she was tall for a woman, he still had to bend down to look her in the eyes. She glared defiantly back at him. ‘Twas not going to be easy, he could tell, but he smiled reassuringly. “What’s your name, lass?”
Sucking in a deep breath, Tenia moistened dry lips with her tongue.
Noting the sympathy on some faces, Maverk drawled, “She bites.”
Red cast him a dubious look. “Seems harmless enough. You sure the wench is a Reeka?”
“What the…” Borga pointed at her left thigh. “She’s been branded. Damn it, Darvk!”
“’Twasn’t my idea!” Darvk’s face reddened as he met the accusing eyes of his crew.
“’Tis your name,” Aamun pointed out.
“The slaver did it before I realized.”
“What else did he do? The poor lass is bleeding like a stuck pig.”
“What? Bloody hell!” Darvk stared at the blood starting to soak through the side of the skirt. How could he have missed it? “Get her inside now.”
Jerking on her chains, the lass gazed up at him appealingly.
“Unchain her so she can walk properly,” Aamun advised.
“I don’t know if that’s wise…” Darvk began, but was immediately howled down by his appalled crew.
“The poor little thing!”
“Never thought I’d see the day when you feared a lass!”
“She’s injured! What would your mother say if she found out?”
Shame filtered through him. They were right, she was injured. “All right, all right.” Darvk unlocked the wrist cuffs and they fell to the ground. Kneeling down, he fitted the key in the lock of the cuffs encircling the booted ankles.
Maverk frowned at the bowed golden head. “Better hurry.”
Hearing the concern in his friend’s voice, worried that she was so docile - she must be very weak - Darvk unsnapped the cuffs, pulled them off and started to straighten up. “Come, we’d better check those injuries - ooff!”
The wench’s boot slammed down onto Darvk’s shoulder to send him sprawling face down into the dirt, while she jabbed Maverk hard in the stomach with her elbow. As Maverk jack-knifed forward, her arm snapped back in a short, sharp arc; the back of her fist slamming into his nose and sending him staggering backwards blinded by tears.
As Darvk pushed upright, he reached for her but she moved fast, lunging forward.
Morgan grabbed for her, but she dived beneath his arm and snatched up the sword that someone had left lying on a crate, rolling away and coming to her feet with the spaceship at her back. She slashed the sword savagely from side to side, forcing the traders back.
“Thank the stars she didn’t get hold of a laser,” a trader muttered.
“Got your answer now, Aamun?” Darvk asked dryly as he straightened and eyed her.
“I guess she is a Reeka,” Aamun replied faintly.

ABOUT THE AUTHOR
A member of both the Romance Writers of Australia & the Australian Romance Readers Association, I live in Australia, where I am happily ruled by my cats. When not procrastinating and sneaking peeks at books, or at work as a nurse, I can usually be found at my trusty computer… procrastinating by playing on the internet… 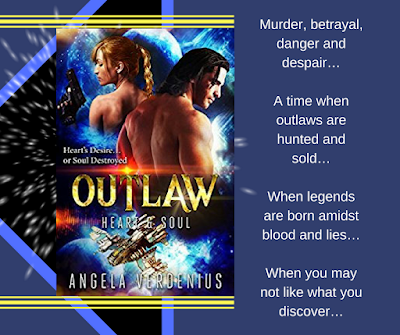