Enchanted by Him by Jacey Holbrand

Hey folks! Jacey Holbrand here. I'm happy to announce I have another story in my Helldorado Mongrels MC series out now: Enchanted by Him! 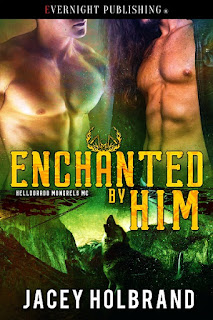 The timeline of Enchanted by Him overlaps the one set in the second book Seduced by Him. (The stories in the series can be read as standalones, but as with most series, it's best if they're read in order). In Enchanted by Him, we're reintroduced to the character Sloth—the man Tex, from Seduced by Him, is forced to ride up to Las Vegas with.
We follow Sloth and learn why he splits off from Tex, we learn Sloth's secret, and of course, we go on a journey with Sloth as he discovers his mate and falls in love. We also see what finally happens to Inferno, the leader of the Helldorado Mongrels MC.
Come be enchanted!
~ * ~ BLURB ~ * ~

Helldorado Mongrels MC member, Sloth, is a man with secrets. He’d joined the club with a specific goal in mind, and when three visitors arrive, he fears one of them will turn his world upside down. Especially since that newcomer is a witch and his mate.
Shaman, the medic from the Skinwalkers MC, was hired to find the woman after the Mongrels’s gold and has secrets himself. When he meets Sloth, the man he knows is destined for him, Shaman begins to reconsider his evil, witchy ways, and his internal conflict irritates him.
Despite the constant clashing of their differences, passion ignites between the two men. But will their secrets cause betrayal and hurt? Destroying their relationship before it even has a chance to fully develop? Or will love ultimately triumph? 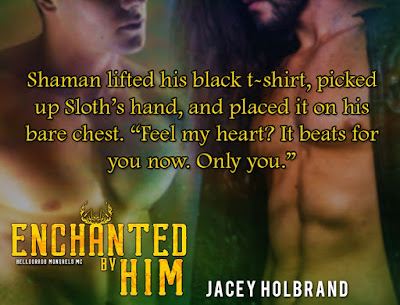 Shaman chuckled, and once Sloth’s gaze connected with the medic’s gray-eyed gaze, Shaman lifted the corner of his mouth in a mischievous grin.
Sloth sucked in a stream of air as the man’s compelling and magnetic gaze held tight to his. Under the intense stare, Sloth’s body crackled and his joints hissed. The tingly sensations and odd sounds made him realize Shaman was stripping away all his cloaking spells. He tried to combat the psychic assault. His own powers weakened as Shaman continued to stare at him. All he had left was the mind block he’d put in place, and even that felt tenuous.
He attempted to step back and found he couldn’t move. Shaman had “frozen” him into place. Sloth thanked the Great Spirit he hadn’t actually been turned into an ice pop. He hated wintery cold temperatures. On top of it all, without the magic that’d been surrounding him for so long, he felt completely bare and exposed.
Again, Shaman offered a short laugh, this time snapping his fingers as well.
Sloth’s clothes disappeared. Not a stitch of fabric remained on him. To his dismay, he truly was naked.

Jacey Holbrand believes life and love comes in all forms and should be celebrated. She’s committed to her muse and writing so she can share her stories with readers. Hot days. Sexy nights. Come play in her world.
Jacey loves to hear from readers! Click the link to eMail her: JaceyHolbrand@gmail.com
~ * ~ STALK ~ * ~
Blog/Website ## Amazon Author Page ## Twitter ## Facebook ## Facebook Page
at May 24, 2018