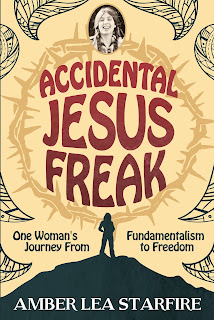 In 1973, Linda was a flute player and music major at a California community college, until she met and fell madly in love with a charismatic piano player, plunging into his world of music-making and drug-fueled parties. When, just three weeks after their wedding, he reveals that he's been "born again," Linda makes the spontaneous decision to follow him into his new religion and, unwittingly, into a life of communal living, male domination, and magical thinking.

With unflinching candor, Amber Starfire chronicles her journey as Linda Carr into the evangelical church culture, where she gives up everything for her husband and their music ministry. But in the process, she loses her most valuable assets: her identity and sense of self-worth. It is only when Linda returns to live with her birth family and faces her complicated relationship with her mother that she finds new purpose and the courage to begin to extricating herself from the limiting beliefs of her past.

By spring we were behind on rent and utility payments and were running out of food. Paul was deep into one of his depressions, so the Beulah Band wasn’t practicing or performing. Without the focus provided by our music and without Paul’s guidance, the commune began to erode at the edges, crumbling into the sea of reality. One by one, people drifted away, most moving back to Portland to take up residence with family or friends. Soon there was just a core of us left: three families, including Paul and Barney’s, two married couples without children, and a few young bachelors.

I remember quite distinctly the day we gave up. The group had exactly $20 remaining in our coffers—not enough to pay any of our bills. Not even enough to buy food for dinner. So, in typical throw-it-to-the-wind fashion, we traipsed up the street to the local Dairy Queen and bought $20 worth of banana splits to share. It felt reckless and fitting to celebrate the demise of our grand communal experiment in this fashion.

I have a polaroid taken that day outside the Dairy Queen. Fourteen adults and five children smile and squint into the sun like one big happy family. Eric and I stand at the back of the group, round-faced in our youth, his hand placed protectively on my arm. I remember feeling both relieved and sad. I was tired of the strain of trying to keep food on the table, tired of the squabbling, the lack of privacy, and feeling shut out by the men. I was ready to live like a normal married couple, just Eric and me on our own. Yet there was a bitter-sweetness to those banana splits.

Jennifer   Thank you for joining me today. Your book sounds fascinating! It also sounds crazy — did you really marry a Jesus Freak? Did you realize beforehand how religious he was?

Amber: I did marry a Jesus Freak, though I think at that time, his religious fervor was evolving. And no, before I married him, I didn’t even know he’d been “born again.” For some reason I’ll never understand, he hid it from me. Perhaps he was afraid I’d change my mind about getting married. So when he did reveal his beliefs to me, we were already married, and I felt I had to make a choice between our life together — between love — and myself.

Jennifer: You use your hippie name for the book — do you still use your birth name? Do you feel more Linda or Amber Starfire?

Amber: I don’t consider my name to be a hippie name (though I can understand why you might think it is), as it wasn’t until 2002 and I was well away from the hippie world when it came to me. For those who are interested, I include an essay at the back of the book that explains my name change and how it occurred.
No, I never use my birth name. And the members of my family have fully adopted my new name, as well, which is my legal name, by the way. When I remember Linda, I’m remembering someone different from who I am today — and though we have a shared past, the present and future belong solely to Amber.

Jennifer: Were you cut off from the outside world, or were you able to leave easily and communicate with others?

Amber: As part of the cult — and I do think that we were a cult, though I have defined the term broadly — I cut myself off from the outside world. I was able to communicate with my family, especially my mother, but I had cut myself off emotionally from them. We immersed ourselves within our religious bubble and had as little to do with the outside world as possible.
Technically speaking, I could have left at any time. No one was imprisoning me. I had imprisoned myself, though I didn’t know it. It’s like the story of the frog and the boiling pot: if you put a frog into a pot of boiling water, it will jump out, but if you put the frog into a pan of room-temperature water and turn the heat up slowly, the frog will adjust to its environment; it will not realize the water is getting hotter and hotter until it’s too late.
It’s like that for people who end up in extremist religions or cults. You are manipulated and introduced to ideas and behaviors over time, not all at once, so you don’t perceive how much your environment is changing you and your view of the world.

Jennifer: The blurb says “male-dominated commune.” I think this is interesting, and also true to most religions. (I can't think of any that are not male-dominated, actually!) From your experience, do you think it’s possible to be a fundamentalist and not male-dominated?

Amber: No, I don’t. I haven’t studied all religions, of course, but I do know that all of the major religions in the world today are male-dominated and operate on the premise that women are inferior to men. And the more fundamentalist someone is in any of those religions, the more they believe that women should submit to men’s authority over them.

Jennifer: If you had to do it over again, would you follow your new husband?

Amber: That’s a tough question. If it were just about our beliefs and where they led me, the answer would be no. But Eric and I had two beautiful children together, who I am glad to have brought into the world. And my experiences have made me who I am today. I would love to know how life could have been different had I made a different choice, but there’s no point in those kind of regrets.

Jennifer: People can get very defensive about their religions — did you get in trouble with the evangelical church culture?

Amber: You can only “get in trouble” if you stay and allow them to continue to have influence over you. If you leave, they have nothing to say about it. If you don’t believe the way they do, most evangelical fundamentalists will have nothing to do with you. They fear their own faith could be somehow influenced or contaminated by nonbelievers, so their reaction, when they find you’ve left the church, is to try to “save” you. Then, when they see you will not “return to the fold,” they turn away. I understand; I was the same way.

Jennifer: What was the catalyst for starting this book?

Amber: I have known for a long time that I wanted to write this story. But first, I felt I needed to write the story of my mother and our relationship — my previous memoir, Not the Mother I Remember. As soon as I had finished that book, I turned my thoughts and attention to this one.

Jennifer: What do you want readers to take away from this book? What message would you like to tell your readers?

Amber: My story may be unique to me, but it is also not unique, in that so many people (mostly women, but not only women) end up giving themselves to a cause or belief system that is not true to who they really are.
So my main message is this: trust yourself more than anyone else. No one other than you can tell you how to live or what to believe in or how to become who you should be. Listen to your own heart. It will guide you to your life purpose and to realizing your potential.

Jennifer: Thank you so much for being on my blog! 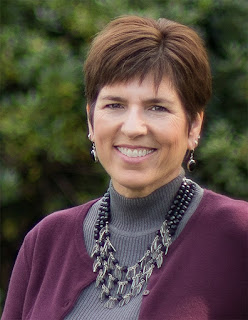 Amber Lea Starfire MA, MFA, is an author, editor, and creative writing coach whose passion is helping others tell their stories. She has published two memoirs: Accidental Jesus Freak: One Woman’s Journey from Fundamentalism to Freedom (2017) and Not the Mother I Remember: A Memoir — finalist for both the 2015 Next Generation Indie Book Awards and the 2013-2014 Sarton Women’s Literary Awards. She has also published several books of non-fiction, including Journaling the Chakras: Eight Weeks to Self-Discovery, and Week by Week: A Year’s Worth of Journaling Prompts & Meditations. Amber is co-editor of the award-winning anthology, Times They Were A-Changing: Women Remember the '60s & '70s. Her creative nonfiction and poetry have appeared in numerous anthologies and literary journals.

GIVEAWAY INFORMATION: Amber Lea Starfire will be awarding a $50 Amazon/BN GC to a randomly drawn winner via rafflecopter during the tour. Please use this rafflecopter code on your post: a Rafflecopter giveaway
at May 22, 2018