Joan the Made by Kristen Pham 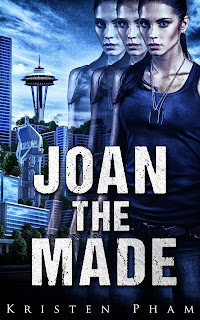 On Joan Fasces' eighteenth birthday, she discovers that she is cloned from the famous Joan of Arc. But being cloned in America comes at a steep price. Segregated and oppressed, clones are forced to act as docile servants to the rest of the Evolved population.

Joan can either run from her fate and spend the rest of her life in hiding, or she can join a Throwback rebellion populated by clones of the greatest leaders in history.

The doorbell rings, and I bound down the steps. My parents hover beside the front door. Mom doesn’t comment on my appearance, even though I can tell she notices my skinned elbows. When I see her knuckles, red and raw from all her hand-wringing, a strange dart of fear pings through my body.

A tall woman with tan skin and short, cropped hair enters our house and shakes my parents’ hands after she sets her briefcase on the ground.

“Jayne Piers, from the Department of Genetic Evolution,” she says, introducing herself.

She shakes my hand, and her stare is piercing, like she can read the truth of my DNA in my eyes.

“Joan Fasces,” I say, willing my voice to stop trembling.

Mom leads us into the dining room, which is elegantly decorated for the birthday lunch she insisted on hosting for me to celebrate being Confirmed as Evolved.

Jayne sits and opens her briefcase. Her movements are efficient as she attaches a needle to her smartphone and pulls my arm toward her. The sharp tip stings my index finger as it collects a drop of my blood for analysis. When she’s done, she sprays my finger and the needle with a sanitizer mist.

“This won’t take long,” Jayne says as data about my DNA rapidly fills the screen of her phone.

I look up for the first time since Jayne took my blood and see that my parents are gripping each other’s hands tightly. Mom’s eyes meet mine and fill with tears, and the realization hits me right before the words come out of Jayne’s mouth.

“Your DNA is cloned. You’re a Genetic Replicant,” she says. There’s no judgment; she’s stating a fact. 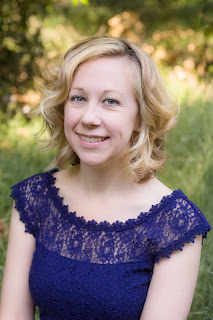 Kristen Pham is a YA science fiction and fantasy writer who lives for really great fudge, roller coasters, and exploring new worlds via fiction. She lives in San Jose, CA with her children and husband, where she eagerly waits for her kids to turn 11 and receive their invitations to Hogwarts.

Kristen Pham will be awarding a $10 Amazon/BN GC to a randomly drawn winner via rafflecopter during the tour.

Review:
Sci-fi made smart - I really enjoyed this story. It had history, science, politics, and a kick-ass heroine. The story is a look into the future, if mankind decides to clone famous people from the past. What would you do if you found out you were actually the clone of someone dead for centuries - even if that person was famous? What would you do if you discovered that who you thought you were was a lie. And now, you had to comply to a set of laws that, by all rights, is unfair? Dealing with identity is tough when you're a teen, so imagine if your identity has already been mapped out, and with it, your destiny - a second rate destiny, that you can no longer control. This was a thought-provoking look at an all-too-possible future.