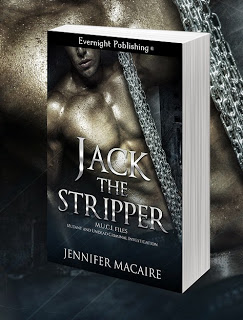 Jack the Stripper
Welcome to The Purple Dee. Pull up a chair and get settled in, the show will start soon! Our featured performer tonight is Jack the Stripper. He's Jack Severn, newly back from the dead. He's magical, he's hot, but evil he's not! Jim Ling-Li, Necromancer extraordinaire, brought him back to life, gave him some extra features, and, as you'll see, made him irresistible --Especially to Jack's ex-girlfriend Brianna. Jack's sexier than ever, and they're better together. But she doesn't want to risk her heart, not again, and definitely not with a zombie.Jack also has a mission. He's back to catch the Heart Taker, the mutant that's been terrifying human and undead alike. His current obsession's none other than Jack's Brianna.So give a big hand for Jack...he's going to need all the support he can get to catch his own murderer.


"...The story is really enjoyable as Ms Winston deliciously brings on the zany dark humor in a manner that really appeals to the fan of the macabre in me. The humor is not too overpowering or too farcical - just enough to keep me laughing. There is already a beautiful kind of poetry in the premise, what with a hero who lacks a heart, but is in love, and who is supposed to be dead but ends up a hero instead. The story doesn't disappoint in delivering a fun Tim Burton kind of romantic adventure where I am concerned."
~ Mrs Giggles eBook review


And here is a post from when I was writing the book! I’m in the middle of finishing up a book about a zombie. The idea came to me last year and I wrote out an outline (which, when I started the book, died writhing in agony as most of my outlines do, lol) The characters took over and I had to dump a whole chapter where I was desperately trying to follow the outline and my characters were gleefully messing it up. So now I’m just letting my characters lead me along. They are: Jack, a zombie, who has come back for revenge. Brianna, a private detective, who is helping jack with his revenge (and with a few other things) Dee, who owns a nightclub and offers Jack a job as a male stripper (with disastrous consequences) and Mamie Hoya, a voudon queen who just happens to have a zombie handbook for Jack. Also in the book are Ling, necromancer who works at the city morgue, his lovely zombie daughter May, and the terrible mutant Heart Taker, who can move so quickly he is invisible to human sight. All these characters decided that my outline sucked and did their best to sabotage it, which is how I lost several characters like Charisma Finch, who I will have to put in my next zombie book, and Carlos the cop with x-ray vision… Well, back to work!
at May 12, 2018