A Remedy in Time 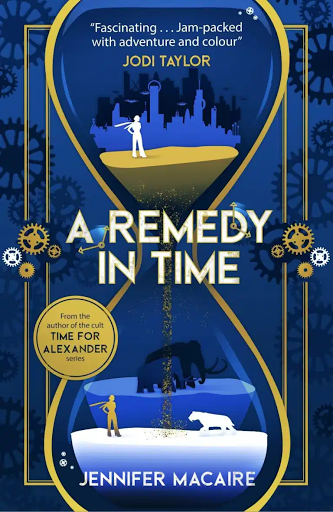 THE GRIPPING AND THRILLING NEW ADVENTURE ABOUT A VACCINE, A VIRUS AND A JOURNEY INTO PREHISTORY . . .

***** ‘Fantastic historical adventure‘ – AMAZON REVIEWER***** ‘I highly recommend it’ – GOODREADS REVIEWER***** ‘No one blends time travel and history as well as she does.’ – AMAZON REVIEWER***** ‘Some of my best reading travels this year!’ – GOODREADS REVIEWER***** ‘You just keep turning those pages to see what’s coming next.’ – AMAZON REVIEWER
About a year ago, I saw a skull on a blog that I hang out on (yeah, I hang out on those kinds of blogs…) that belonged to an extinct animal known as a sabretooth tiger (or smilodon). I’ve always been a dinosaur geek, but the Paleolithic animals ran a close second – mammoths, giant elk, dire wolves, and sabretooth tigers, among others. And when I saw the skull it made me wonder how exactly the tiger used his huge, over-sized upper canines – did he use them to stab? That would make the most sense. But how? Wouldn’t they break? What kind of stabbing motion would be the most effective?
I went searching for answers, and came up with a lot of different theories. Looking at the skeleton, I was struck at how stocky and massive the animals forearms were. I leaned towards the theory that the animal would leap on his prey from above, grip tightly with its powerful forelegs, stab it in the neck or as close to the skull as it could, using his huge canines like daggers, and probably leap off the animal and wait until its prey bled to death. I even thought it would explain why so many sabretooth tiger skeletons were recovered from tar pits. Wounded animals head downhill, and downhill is water, and in those days – the water covered the tar pits where the animals bogged down and were trapped.

How could I test my theory? Sabretooth tigers (and actually, they are now referred to as sabretooth cats, but I honestly prefer tigers…) are extinct, and I don’t have the material to clone one and bring it back to life Jurassic Park style. The next best thing would have to be a voyage back into time to see one for myself, so I sat down and wrote “A Remedy in Time”, about a woman who is sent back to the Paleolithic to find out where a deadly virus has originated from. Her hypothesis is that it came from saber tooth tigers.

When I wrote the book, Covid-19 didn’t exist yet, so I can’t claim it was the idea behind the story. In fact, the idea came from an article I read about typhus in American cities. One type, a feline typhus, is a parvovirus. Now, parvoviruses are very resistant and are able to survive for several months (or even much longer!) in the outside world. Coronaviruses are bigger (relatively speaking) and a little more fragile. They are also not very species-specific, so they mutate from infecting animals to infecting humans (as Covid-19 has) fairly easily.

Anyhow, back to the parvoviruses – the feline parvo is highly contageous and very deadly. It has never (and most likely never will) mutate to infect humans. But a writer has to do what a writer has to do, and in my book the virus infects humans so my heroine, Robin, goes back in time to get some samples from the best-known feline of the time – the sabertooth tiger. That’s not all of the story, of course – there are bad guys and good guys, a romance, a caveman who learns to love chocolate, and lots of swearing – so fasten your seatbelt and get ready for a wild ride to the Paleolithic!

A Remedy in Time

To save the future, she must turn to the past . . .San Francisco, Year 3377. A deadly virus has taken the world by storm. Scientists are desperately working to develop a vaccine. And Robin Johnson – genius, high-functioning, and perhaps a little bit single-minded – is delighted. Because, to cure the disease, she’s given the chance to travel back in time.But when Robin arrives at the last Ice Age hoping to stop the virus at its source, she finds more there than she bargained for. And just as her own chilly exterior is beginning to thaw, she realises it’s not only sabre-toothed tigers that are in danger of extinction . . .