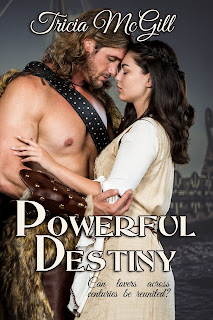 It is 850 AD and Norse warrior Rolf lands on the shores of East Anglia determined to take revenge on a Celtic clan. Following a fierce battle, where the Celts are savagely killed, Rolf comes face to face with the daughter of the slain Celtic leader. So stunned by the beauty, along with the courage of Brigid, he is convinced that his Three Fates of Destiny brought them together. Resolved to make this woman his own, he spares the lives of the captured Celtic women and children and takes them back to his homeland across the ocean.

Strangely drawn to the Norseman who is so sure they are destined to be together, Brigid must fight against succumbing to the wishes of the man who killed her father. Nevertheless, to save her fellow Celtic captives from slavery or worse, Brigid must keep a bargain with the Norse leader—a bargain that will see her tied to him forever.

In present day Cornwall, naturally shy Rolf shares his secluded lighthouse with his wolfhound. An artist, he delights in the rugged scenery and ever-changing weather. While in the nearest bookshop one day, he meets a newcomer to town. Brigid’s unusual personality strikes a chord with him. Not only are both convinced they have met before, but their fascination for Viking and Celtic history forges an unusual bond between them. Outspoken and forthright, Brigid sets out to break down the barrier of reserve and caution Rolf has erected over the years. Is it simply whimsy or can lovers across centuries be reunited?

The woman stood straight and proud, long hair as black as the night falling to her middle. A band around her forehead secured its flowing beauty. Her clothing was no different from that worn by any other Celtic female encountered in his past, but something about her bearing proclaimed that she was very different in some way. As she touched some sort of talisman at her belt, she muttered what could have been an incantation. Perhaps she was praying to her gods.

In all his life and many travels, never had he seen such a vision of loveliness. Then Rolf cursed beneath his breath. What was he thinking? This was a Celtic female, only fit for becoming a slave. Nevertheless, there was something about this female that told him she would be no man's slave, no matter how he tried to break her spirit. 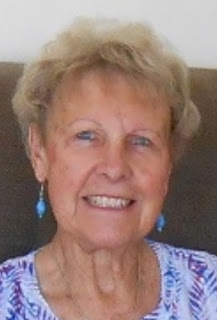 Award winning author Tricia McGill was born in London, England, and moved to Australia many years ago, settling near Melbourne. The youngest in a large, loving family she was never lonely or alone. Surrounded by avid readers, who encouraged her to read from an early age, is it any wonder she became a writer? The local library was a treasure trove and magical world of discovery through her childhood and growing years. Although her published works cross sub-genres, romance is always at their heart.

Tricia’s love of animals has always shown up in her books. Tricia devotes as much time and money as she can spare to supporting worldwide conservation groups and is passionate about supporting those who do all they can to preserve our wildlife for future generations, especially elephants and orangutans who seem to be getting the raw end of the deal even in this enlightened age. She also volunteers for a local community group that helps disabled adults and children to connect to the internet with provided computer equipment. When people ask what she does in her spare time she is heard to ask, “Spare time, what is that?”

GIVEAWAY INFORMATION: Tricia McGill will be awarding a $25 Amazon or Barnes and Noble GC to a randomly drawn winner via rafflecopter during the tour.

I was excited to read another of Tricia McGill's books. I have to admit, I've been a fan of her writing since I read her first one!
Do you believe in reincarnation? Can passion travel through the ages? And do you think that there are people destined to be together? The story opens with a Viking raid on a Celtic village, where Rolf, the Viking leader, meets Brigid, a Celtic woman. There is no sugar-coating the horrors of the Viking raids. At that time, the raids were bloody and merciless. But people of that time did not have the choices we have now.  War and raids were a fact of life, especially along the coast. The Vikings were a greatly feared people, and they ranged far and wide. When Rolf sees Brigid, he realizes she's meant to be his. He has found his destiny. But in a cruel twist of fate, he is now her enemy and her captor. Brigid has to learn to accept the fate that has destroyed her life but offered her a new chance at happiness. The second part of the story takes place in modern times, when another Rolf, looking for a gift for his neice, bumps into a woman who seems eerily familiar, and he finds himself wondering if destiny, or fate, really does exist. A romantic, fast moving novella - this book will sweep you away to another time and place, and make you believe in a love ruled by fate.

Highly recommended to readers of romance, historical romance, and time travel romance. Fans of Barbara Erskine will adore this tale!