Today I'd like to introduce Tom Williams,  historical fiction & espionage writer! I first discovered his books and read "Burke in the Land of Silver", because it was set in one of my favorite countries, Argentina. Since I had spent much time there, I grabbed the book, and I'm glad I did. 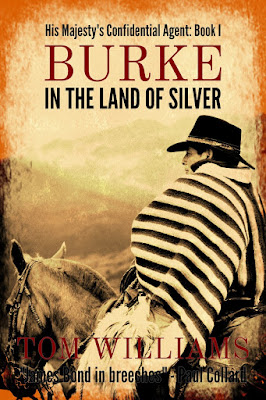 Napoleonic wars. Burke (James Burke!) is a spy for the English who doesn’t hesitate to work for what he feels is right against a background of war and greed, as gold and silver are used to fuel the huge war machines of the three great powers of the time: England, France, and Spain. “Burke in the Land of Silver” took me back to a country I love, Argentina, and I learned much that I didn’t know about its history. But mostly, I followed the fascinating adventures of a gentleman spy caught between three warring countries intent on sacrificing their young men in order to gain wealth and power. The book was wonderfully researched and fast-paced. I couldn’t put it down, and I’m eagerly looking forward to reading the next books in the series.

Welcome to my blog, Tom, and please tell us more about your books, and how you write them!

Tom:  Like Jennifer, I write historical novels that have quite a lot of historical fact in them. That means that for every word we write, we both have to read dozens to get some sort of idea of the history that we are writing about. Which used to mean weeks spent in libraries, but since the massive increase in the availability of books online, it now means spending weeks in front of screens. Compared to Jennifer, I'm really lucky because my books are mostly set in the 19th century and I can now read an enormous amount of contemporary material without ever leaving my desk.

Nice as my desk is, I do like to get out every now and then and research trips away are always fun – the more so as you can pretend that they are work.
Burke in the Land of Silver was the first book I wrote about James Burke and based very closely on the events of his life. The most important parts of the story are set in Buenos Aires and, as I've always liked Argentina, that was the perfect excuse for the greatest research trip I've had.

The buildings here haven’t changed much in two centuries
Buenos Aires is a huge modern city, but at the centre some streets that have changed very little in two hundred years. I spent days walking around them, taking photographs to remind myself what they look like and finding paintings in the local museums that showed them as they were then. I explored the remains of the old Spanish fort that now lie underneath the presidential palace and I admired the British flags captured during the two British attacks on the city.
I was lucky in that the porteños (the people of Buenos Aires) are fiercely proud of their country and the city is full of museums with fascinating material about their early history.

Pioneer wagon in a Buenos Aires museum
There is more to Argentina than Buenos Aires, though, and Burke did leave the city to explore the countryside. His adventures start with a visit to an estancia on the pampas where he rides out with the gauchos tending their cattle. We took a day trip to San Antonio, where there is a museum of rural Argentine life that features a farmhouse of the period, which became the model for the one Burke visits in the book. Of course, we could hardly ride out with the gauchos. No, that had to wait for another trip that featured an unforgettable morning galloping across the plain while real working cowboys lassoed the new-born calves to check their health.

Saddling up
Historical research can be such hard work.
Here is a list of Tom's books, and the dates they will be available. I thoroughly recomment starting with "Burke in the Land of Silver", but I believe you can read them in any order, and there is a stand alone book, "The White Rajah", that is on my TBR pile!

JAN 5: Burke in the Land of Silver

JAN 19: Burke and the Bedouin